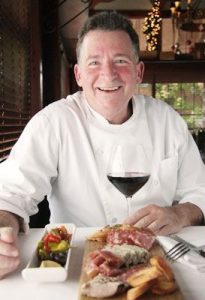 John Sheely of the Bistro Wine Bar and the newly opened (August 2013) Osteria Mazzantini is one of Houston’s best and best-loved chefs and restaurateurs, but his start in the food business 38 years ago had humble beginnings.

The native Houstonian came to cooking not by choice, but by default. During high school in the Memorial area of Houston, Sheely worked part-time in fast-food restaurants to earn spending money. On a spring break ski trip to Colorado, the chef-to-be set his sights on returning to the area to be what he terms, “a ski bum.”

After graduation, Sheely moved to Colorado to indulge in his passion for skiing. He fell in love with Vail where, to support himself, he once again turned to restaurants. Too young to work up-front in restaurants that served alcohol, he fortuitously ended up in the kitchens of several of Vail’s best dining establishments. He stayed in the upscale ski resort for 18 years, eventually purchasing his own restaurant, L’Ostello.

By the mid-’90s, Sheely decided that he had skied to his heart’s content and was ready to return to Houston to open a restaurant. In August of 1995, he opened Riviera Grill in a modest shopping center, but the food was anything but modest and caught the attention of diners and critics alike. Based on the elegant and irresistible food at Riviera, Sheely was honored as a “Modern Master,” by noted restaurant critic John Mariani and named one of Houston’s “Top Ten” chefs by Houston’s city magazine. Sheely eventually moved Riviera Grill to a Memorial-area hotel where he operated it until the spring of 2002.

Sheely opened his Wine Bar in January 2002, naming it for the state bird of Texas. The modern bistro combines Sheely’s Texas roots with a style of cooking that he knows well, that of the Riviera, specifically the French Riviera. The feel of the menu is “country-French-meets-American-market” with seasonal changes, and the upscale-yet-casual atmosphere dining room is eclectic and lively. It is a popular neighborhood spot for the well-heeled inside-the-Loop diners and food lovers from across the city. It was named one of the Best New Restaurants in America by Esquire; a Top Table by Bon Appetit; a Neighborhood Gem in Gourmet; and Where to Eat Now in Texas Monthly, among other accolades.

In August 2013, Sheely debuted Osteria Mazzantini in Houston’s Galleria area. The restaurant is named for and pays tribute to his mother’s side of the family, the Mazzantinis, who left Tuscany for America and arrived in Galveston, Texas in the late 1800s. Its Rustic Italian Cuisine incorporates hand-crafted Italian dishes with top quality ingredients, fresh seafood from the Gulf, where the Mazzantinis once fished, pasta made fresh in-house daily, and a wine and a cocktail list that perfectly complements the menu.

When he is not cooking in the kitchen, Sheely enjoys traveling and discovering great food and wine with his wife, Violeta, skiing in Vail, Colorado with their son Patrick, and visiting family in Mexico.